All Vegetables and Fruits

Dear Customer, We will be resuming our services from tomorrow i.e. 27th of July 2020, 9am. See you soon :) Stay Home and Stay Safe.

Select your region to explore 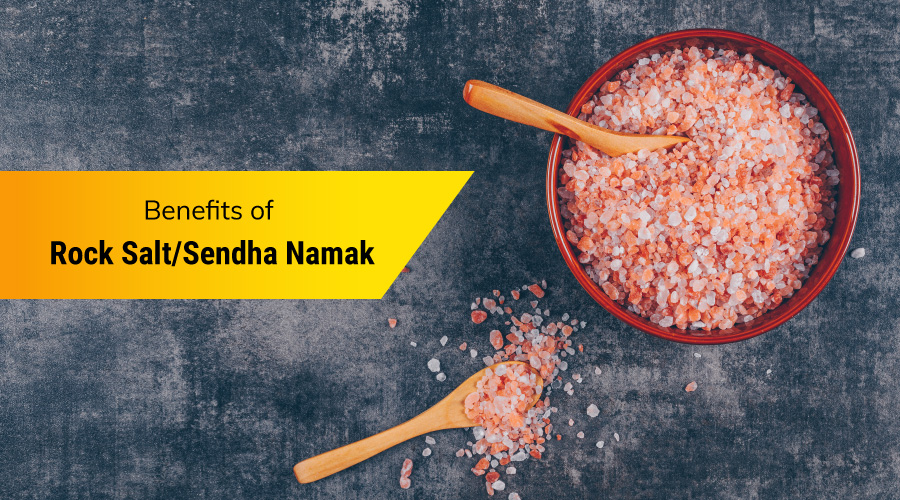 Rock salt, also known as Sendha Namak, is a type of salt formed when salt water evaporates from the sea or lake. These salts are colourful crystals of sodium chloride, which are formed during the evaporation process.

Rock salt is considered to be a healthy ingredient that has a high value in Ayurveda. They are helpful in treating a lot of sicknesses such as cough and cold, digestion and eyesight problems.

However, many of us will doubt the authenticity of these claims because we don't know whether these claims are backed by science or not. So for a clearer picture, we thought of adding some scientifically proved benefits of rock salt.

Many have the misconception that salt and sodium are the same things. We agree that every salt has sodium, but it is only one part of the salt. Salt also contains some other minerals such as chloride, nickel, cobalt, zinc, manganese, iron and copper. All these minerals are the reason for salt's various colours.

The above minerals are good for human health, but you cannot use salt as a primary source of minerals because the mineral content in salt is low. You can get an ample amount of sodium and chloride from salt, which are also good for your health.

If the sodium level of your body drops, then you might suffer poor sleep, seizures, mental problems and convulsions. In some cases, sodium deficiency might turn serious and take a person's life or put them in a coma. A low sodium level might also cause attention disorders and unsteadiness.

If you are adding rock salt to your diet, then you can avoid the risks of sodium deficiency in your body. This is one of the key benefits of rock salt.

People who have rock salt in their diet do not face such issues because rock salt contains various electrolytes that can relieve muscle cramps and pain in the body.

According to various Ayurvedic remedies, rock salt is considered to be a home remedy that can be used for treating digestive problems in the body. Rock salt is efficient for treating various digestive diseases such as heartburn, constipation, bloating, vomiting and stomach pain.

By adding rock salt instead of table salt in your food, you can improve your digestion and say goodbye to all the stomach problems that you are suffering. This is also one of the best benefits of rock salt.

It has been a long since people are using rock salt as ayurvedic medicine. All the health benefits of rock salt are quite impressive and can help you keep your body healthy. People should start including rock salt in their diets but a limited quantity so that they can have a balanced and healthy diet.

Jaggery vs Sugar - Who Wins

Difference Between Polished and Unpolished rice